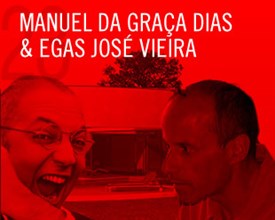 He graduated in Architecture at the Lisbon School of Fine Arts in 1977 and he has taught at the most prestigious Portuguese Universities in this field. He was the co-founder of the Contemporânea studio, together with Egas Vieira, in 1990. He was awarded many special mentions and various awards, among which 1st place in the tender for the Portugal Pavillion at Expo'92 in Seville and 1st place in the tender for the construction of the new headquarters of the A.A.P./Banhos de S. Paulo (currently, the Association of Portuguese Architects) in Lisbon (1991), both in association with Egas Vieira. These architects also won the AICA/Ministry of Culture (Architecture) Award, relating to 1999, for their entire work. In 2006, Manuel Graça Dias was also awarded the rank of Commander of the Order of Infante D. Henrique. He participates regularly in several publications and conferences.