Manuel Aires de Mateus received his degree in Architecture from the Lisbon Technical University in 1986. While he was still a student, he worked closely with the architect Gonçalo Byrne and later with his brother, the architect Francisco Aires de Mateus. His career is marked by other renowned collaborations and several prestigious international awards such as 1st place in the Architécti/Arkial Prize, Lisbon (2000), 1st place in the II Iberian-American Biennial of Architecture in Mexico City (2001), 1st place in the Luigi Cosenza Prize (2001) in Naples, 1st place in the Prizes Fad d'Arquitectura I Interiorisme (2001) in Barcelona and also in Barcelona, 1st place in the Prizes Fad d'Arquitectura I Intervençes Efémeras (2010). He participated in numerous conferences and seminars across the Americas, Europe and Japan. His career is still deeply linked to academic education: he taught in Switzerland, Lithuania, Slovenia and the USA and he currently teaches in Portugal. 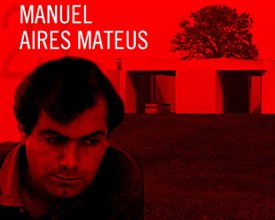