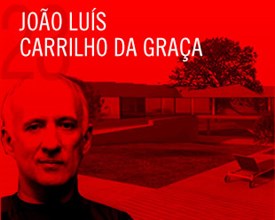 João Luís Carrilho da Graça is an architect, with a degree from the School of Fine Arts of Lisbon which he obtained in 1977, the year in which he began his professional activity. He played a major role in university education and was an assistant, professor and coordinator in several national universities. In addition, he was a visiting professor at the University of Navarra, for several years. He is also a regular guest at seminars and conferences in various international universities and institutions. His entire work received several awards, including: the title of "Chevalier des Arts et des Lettres" by the French Republic in 2010, the "Pessoa Award" in 2008, the International Luz-luzboa Biennial Award in 2004, the Order of Merit of the Portuguese Republic in 1999 and the "Aica-International Association of Artists and Art Critics" in 1992. He was also awarded the "Piranesi Prix de Rome"in 2010, the "Fad" award in 1999, the "Valmor" award in 1998 (by the Pavillion of Knowledge of the Seas - Expo'98), the "Secil Award of Architecture" in 1994 (by the School of Communication and Media Studies of Lisbon) and he was nominated six times for the European Architecture Award "Mies van der Rohe".