Graduated in Architecture from the Oporto School of Fine Arts in 1955, he is one of the biggest names in national architecture. Internationally renowned, he has received several awards, both in Portugal and abroad, including the Contemporary Architecture Prize Mies van der Rohe (1998), the Pritzker Prize (1992), the Prince of Wales Prize from Harvard University (1998), , two Golden Lions (2002 and 2012) - best project at Venice Biennial and Career Award, among many others.
Álvaro Siza Vieira held a teaching position and was visiting professor in the most prestigious schools of architecture in the world (Polytechnic School of Lausanne, Graduate School of Design - Harvard, Oporto School of Architecture and the school where he graduated). He is a member of the American Institute of Arts and Scienceand Honorary Fellow of the Royal Institute of British Architects. He has honorary degrees from nearly 20 universities around the world. 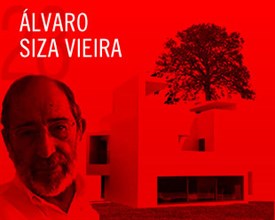